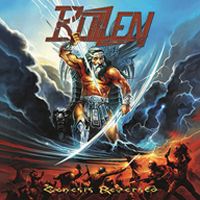 ‘Genesis Reversed’ is the full length debut from German speed/classic metallers Blizzen, and an incredible opening statement it is. The band’s sound harks right back to the early 80’s with elements of Diamond Head and Holocaust right up there in the mix. The clean vocals are especially refreshing in my book. But this isn’t an album that relies on individual standouts. ‘Genesis Reversed’ is all about the songs, and to be honest, there isn’t a duff track on this record. Blizzen’s grasp of melody, song dynamics and catchy fist -in-the-air choruses leave the listener wanting for nothing. If this album had been released in 1982, Metallica would have been telling us about them and covering their songs for years.

Given that this is only a first foray, we can only hope that Blizzen continue to grow and develop and someday perhaps even take their place among the greats of modern, classic metal. Definitely a band to watch and an album worth checking out.