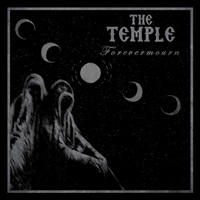 Doom metal – pure solitude in slow paces, riffs that reverberate and lurk in the atmosphere, thunderous drums and plodding bass while the vocal melodies also take a similar, sorrowful tact. Greece’s The Temple originally started in 2005, took a break for a little while after their first demo release and now return with their debut full-length "Forevermourn". When done well, there’s something comforting about the melding of melancholic, down tuned electric riffs and equally mood-moving melodies – taking something painful and bringing joy out of the darkness.

When the shortest song is the opener "The Blessing" at just over 5 minutes, you know that the quality of the arrangements better be good to be acceptable as stellar doom – and The Temple succeed on that front. Twin guitar melodies build and build into the heavy distortion riffs, "Death the Only Mourner" a midway album highlight, as images of Candlemass, While Heaven Wept, and even the mighty Primordial come up – bassist Father Alex as a vocalist conveying this epic from the mountaintop delivery. Proper tones keep the heaviness at the center of The Temple’s sound – the snare hits during "Mirror of Souls" from Paul sending chills, even at their slow BPM rate while the axe tandem of Felipé and Stefanos drop the doom/epic sledgehammer and occasional throw simple yet effective harmonies on "Beyond the Stars".

Saving the longest arrangement for the finale, "Until Grief Rips Us Apart" at 12 ½ minutes lodges itself deep into the cranium – weighty chord progressions that signal trills of black metal against hypnotic doom, the vocals not kicking in until the 2:35 mark and the purposeful slow down during the middle section legendary for those who love Pallbearer or older Solstice. The stark cover also paints an appropriate visual picture to The Temple – a quartet who love the purity of epic doom, creating material that should put them near their heroes.