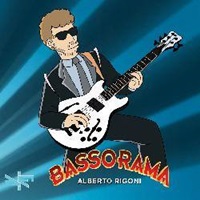 An Italian bassist most known for his work in the progressive rock band Twinspirits, Lady & THE BASS as well as a co-producer of the Vivaldi Metal Project, Alberto Rigoni releases his fifth solo album, focusing on the love and proficiency as this low-end instrument. "Bassorama" may not necessarily be dedicated to one particular genre at heart, but there is some crafty interplay and composition work amidst the stellar, progressive, and often funky lines on display.

Performing all of the instruments, Alberto chooses to employ eight additional bass players to add their touches to the material – and it’s not the expected players from the hard rock or progressive fields. Beyoncé bassist Divinity ROXX comes up on "Free Your Mind", definitely more in line with modern r+b / rap that would be heard on terrestrial radio, while we get Living Color’s Doug Wimbish for the outer worldly "Doctor Who" – samples and loops creating this sci-fi atmosphere while the light jazz / new age bass sequence goes toe to toe in creating this aural inter-galactic odyssey. Funk gains the spotlight for "FutureFunk" and the follow up "Funk Me Fender", and the electronic keyboard/ drum undercurrent of the former will surely get a lot of approval from more than the musical crowd, while the latter featuring Prince bassist Nik West falls right in line with what the Purple One himself treasures.

Mostly instrumental save for a few narrative or computer elements, "Bassorama" showcases Alberto’s love for a variety of genres, and it works because the themes are kept on point. 11 tracks in 39 minutes that groove, groove, and groove.