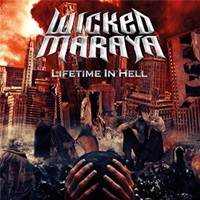 Hailing from Long Island and New York City, NY, Wicked Maraya are a powerful traditional-oriented metal band that many critics felt were victims of being at the wrong time to truly capture a wider audience appeal with their dynamic songwriting, attitude, and creative conviction. 1994’s "Cycles" is an album that stands up well decades beyond its debut on the scene – intertwining acts like Crimson Glory, Sanctuary, and Queensrÿche with their hooks on both a musical and vocal level. Spending a few years in the mid to late 90’s as Maraya (releasing two other albums), the band would break up. Returning a few years back, "Lifetime in Hell" is actually an unreleased album from 1991 that also contains two newer songs "Fall from Grace" and "Suicidal Dawn" recorded in the fall of 2014 to prove this is a full-on, active reunion.

Most of this material has a primitive, rawer attack while also hinting at the thicker production values and layering of "Cycles". The back and forth gang/ main vocals give the title track immediate appeal, the echoing riffs and slow/steady double bass keeping the energy flowing. Singer Lou Falco has an edge to his melodies that come from more of a Jon Oliva-texture, aiding his natural Geoff Tate-like highs during a more commercial number like "Tomorrow’s Child". Cool narrative elements open the semi-gallop oriented "Seizure", a lot of the heads down riffing from Michael Iadevaio and Daniel Malsch almost bordering on the finest Bay Area thrash tandems going back in the day. It’s also cool to hear an early rendition of "Johnny", one of my favorite songs that made it to "Cycles" – the primal bass and low to high screams endearing against the simple, harmony filled chorus.

The two new songs don’t relent either in terms of Wicked Maraya still delivering top notch metal this many years down the line. "Fall from Grace" contains a very emotive lead break that isn’t a million notes squeezed into an eight bar measure, while "Suicidal Dawn" has that darker, steady power groove that’s been a Wicked Maraya trademark since their inception. Kudos to the band and Massacre Records for releasing this old meets new studio record – the future looks very promising for another successful go-around with these gentlemen.