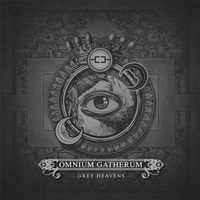 It’s no secret that one of my favorite genres in the metal realm is melodic death metal. The marriage of hooks, harmonies, and heaviness opens up numerous possibilities for bands from album to album – and one of the leaders over the past few records for my money has been Finnish group Omnium Gatherum. Their 7th studio album "Grey Heavens" comes at a point in their career where the sextet are making major inroads in global touring – the years of hard work on the recording front establishing a foundation that is coming to fruition.

A boatload of guitar harmonies serves as the melodic foundation to the band’s sound – often at varying speeds from the speedier "The Pit" (although the instrumental mid-section is much calmer and serene) and circular "Rejuvenate!" to the pounding "Ophidian Sunrise" that is OG at their most doom/death mixture. Keyboardist Aapo Koivisto doesn’t feel the need to be a syncopation, arpeggio driven compatriot to the proceedings – his sparse use of layering gives a lot of the songs a darker, semi-cinematic airiness. The rhythm section of bassist Erkki Silvennoinen and drummer Jarmo Pikka shift seamlessly between the double bass driven pulsation and then mid-tempo or slower groove elements without missing a beat – "Skyline" an example of a more straightforward offering that many in the melodic death community appreciate as it’s very much in the pocket and crushingly heavy at the same time in more of an early 90’s Metallica meets In Flames tradition.

Guitarists Markus Vanhala and Joonas Koto deserve grand kudos for their point/counterpoint measures and teaming up for that twin bliss: the 8:36 "Majesty and Silence" a true brain twister in the sense of a lot of atmospheric clean parts come up against another crushing main riff while the lead break features a bevy of back and forth speed and melodic runs that will be studied. Never fear that the death portion will be forsaking – Jukka Pelkonen’s growls throughout, and only occasional background cleans come into the picture, more as another coloring element without overstaying their welcome.

"Grey Heavens" is another brilliant record for the band – never losing sight of the see-saw balance between aggressive riffs and vocals while being musically sharp and relevant. Omnium Gatherum’s in the peak of their career- let’s hope the ride lasts for a long while.