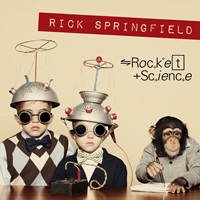 A success on television and the pop charts during the 1980’s through the US soap opera General Hospital plus albums like "Working Class Dog" and "Success Hasn’t Spoiled Me Yet", Rick Springfield continues to put out new studio records while touring the globe for his ardent fan base. No longer just a teen/ pin-up idol, the man has second and third generation fans – and his latest record "Rocket Science" is sure to continue that trend.

The 13 songs on this album run the gamut from pop to melodic rock, even veering into modern country flavors to give the listener a dynamic effort that goes down smoothly. Launching the record with a guitar-based rocker "Light This Party Up", you feel like the man hasn’t lost any sense of melody, hooks, or harmony, even with the ‘cowboy up’ lyrics. The semi-acoustic "That One" has a lot of commercial appeal, Rick gliding like a summer breeze in chorus heaven while the instrumental sections often provide a little orchestral texture to the proceedings. The positive feelings emanating from "Pay It Forward" as Rick tries to make the world work together as one gives mental food for thought and hopefully inspires his listeners to even stronger calls to action.

The "Norwegian Wood"/ Beatles feel for "Found" with mandolin spots also contains some steel guitar moments, a tender ballad where Rick gets to reach back into a lot of his emotional back story and still has the range to deliver the melodies as a professional. And we will even get more of a country/folk throwback number for "All Hands On Deck". Smartly teaming up with long-time bassist Matt Bissonette on a majority of the songwriting, Rick just knows where to let the arrangements flow and keeps the songs on a tight timeframe – at 46 minutes you never feel exhausted but actually invigorated to play this over again and again.

"Rocket Science" proves Rick Springfield has plenty left to offer his listeners, and is a great record for a multitude of rock, power pop, and country fans to treasure.