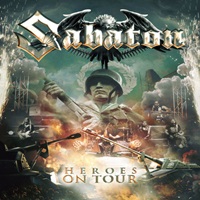 Scheduled to come out on Blu-ray/ DVD as a two-disc set, "Heroes On Tour" also has an audio CD accompanying the proceedings and this is what’s up for inspection. Straight from their Wacken Open Air performance of 2015 that brought the house done, we have a 16 song set that gives us ample reason to understand why their happy going battle melodic power metal has captured hundreds of thousands of metal fans all across the globe.

Intertwining hits like "Ghost Division", "The Art of War", and "Swedish Pagans" with latest material from the "Heroes" album such as "To Hell and Back", "Resist and Bite", and "Night Witches" – the band are out to provide the metal entertainment at all stops. Joakim takes in the festival audience moment to moment – eliciting all the proper jumping, shouting, sing-a-longs, and engaging in a few beers as the audience chants in German. Road warriors they are, tightness is not in question – the band breaking out a lot of tanks, pyro, etc. to keep the visual element on high (seguing into "Panzerkampf").

The total package should you get the DVD or Blu-Ray sets includes two concerts from Wacken as well as their own Sabaton Open Air festival that contain different track listings for maximum Sabaton content for your money. People wonder if there will be any recent bands who can replace the long veteran guard in a huge headlining capacity once they retire. Sabaton are going to be at least one of those bands in the running based on their rapturous reception everywhere they go.