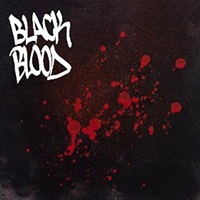 Stoner metal can be a feast or famine proposition- like most sub-genres, in this journalist’s view playing ability and songwriting need to be the priority over prolonged escapades into feedback and creating this heavy atmosphere. For Finland’s Black Blood, their choice to incorporate a lot of southern groove to the proceedings keeps their self-titled full-length moving along at a nice, comfortable pacing. Together since 2010, the quartet write material that keeps low-tuned riffs and quick arrangements at heart – a lot of these 13 songs hover between the 2 to 4-minute mark, and while Sabbath may be the springboard to the BB influence tree, it goes a lot into the branches of American acts like Black Label Society, Machine Head, and Corrosion of Conformity.

Guitarist Jukka-Pekka Lappalainen has a monster axe sound – leveling the sonic landscape as his thick, raw tone crushes based on exposure to a roller coaster number such as "The Failure" and the mid-tempo anthem "Dopesmashed Jazz" which does have a little bit of swing to it for the main passages. Admitting that a lot of their songwriting forms out of drinking and rehearsal jam sessions, whatever method works best is not something Black Blood should mess with. Any heavy metal fan will treasure "Violence Is Golden" – if only for the title alone and hearing ‘Satan whisper’ as a lyric in the track, while "Transfusion" elevates the band to dynamics of a different dimension, the bass lulling you into this false sense of security before the guitar and drum barrage sink you six feet under.

I’ll admit that the hoarse, sometimes gurgling nature to Heikki Rautava’s voice can be an acquired taste that misses the mark as often as it hits it – but Black Blood’s musicianship and songs can overcome this little setback. Black Blood capture the right vibe of stoner/groove metal – eschewing clichés for real, down to earth performances, and as such this is a decent start.