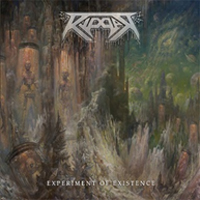 This is the second full album from Chilean thrashers Ripper. The sound of the band is fairly easy to describe – Sepultura and Kreator have a night on intense passion out the back of a club somewhere in deepest Latin America. Nine months later Mille Petrozza is being asked to make an appearance on some crummy TV show to take a paternity test.

I judge modern thrash acts by several standards. Firstly, I look for authenticity. Do they honour the sound of those classic days of early thrash? Many bands do but they can often lose sight of the big picture and end up sounding like a tribute act of whatever bands they reference most. I am happy to report that Ripper side step this pitfall easily. Yes, they sound like they could have come from the later waves of thrash before the genre drowned in its own effluent. No, they don’t just sound like a shallow imitation of their idols. So far so good. Then we have to ask – do they incorporate modern influences and recording techniques, using them to improve on the basic package while staying true to the genre? Again, Ripper win on this point. The production is extremely clear and modern, and the musicianship has that level of proficiency that we have some to expect these days. (I know – one of the things we loved about early thrash was how messy some of the bands were, but it is hard to go back once you’ve heard the likes of ‘Beneath the Remains’ or modern bands like Vektor. And there is no shortage of scrappy playing in the South American black/death/thrash scene if that is what you are really looking for). Lastly, we have to look at the songs and again, they are pretty much faultless.

Ripper have taken the standard thrash template and used it to produce a very cool album that showcases an extremely proficient band full of potential. These guys are a definite act to watch out for if thrash if your thing.