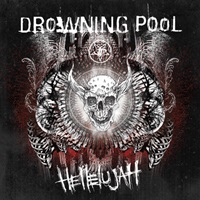 Texas power groove/modern metal act Drowning Pool return with "Hellelujah" – another 12 track sonic kick in the head that steamrolls with aggressive energy and testosterone fueled screams plus riffs/grooves that won’t disappoint their audience. New vocalist Jasen Moreno has a Layne Staley twinge to his normal register for "By the Blood", but his caustic screams are straight out of the Phil Anselmo/Pantera blood school. There’s even more of a Foo Fighters feel to the drumming and guitar back and forth for "Drop", ensuring dynamic diversity song to song.

Establishing themselves 13 years ago through their platinum debut "Sinner" and the single "Bodies", this record doesn’t relent in terms of hooks and grooves. Guitarist C.J Pierce also throws down fiery lead work whenever possible, and the occasional transistor radio sample for the beginning of "We Are the Devil" signals the next battle charge as drummer Mike Luce lays down smart fills and double bass kicks. The southern swinging "My Own Way" could be another Drowning Pool favorite, the chorus ready for audience call and response work.

When needing more of a modern hard rock/groove selection, Drowning Pool isn’t a bad place to go. "Hellelujah" may not win many critic awards at the end of the year- but when it comes to fan appreciation, that’s where the record’s ultimate appeal lies.