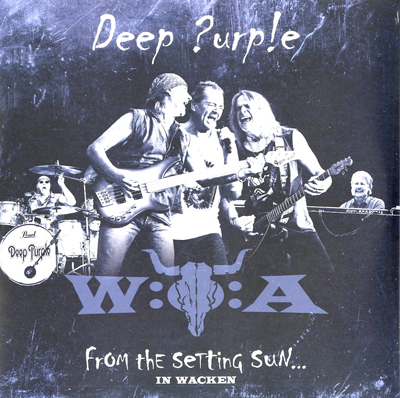 As much as I love and cherish Deep Purple, I have to admit that a few of their studio albums and live releases are slightly lacklustre and a bit of a mixed bag. Also, I can hardly think of any other hard rock band with as many live albums under their belts as these guys, and not all of them are relevant, to say the least. However, the last couple of studio full-lengths, namely «Rapture of the Deep» and «Now What?!» are strong outputs, and the band was utterly solid and tight when I attended one of their gigs in Norway back in early 2014. I was therefore quite excited about this 2015 live release entitled «From the Setting Sun…in Wacken», which was shot and captured on tape back at the Wacken Open Air Festival back in August 2013, and I can honestly tell you that I was not disappointed. It is basically a package/small box of sorts in that it contains 2 CDs and a DVD.

The band is tight and in great shape, and you can clearly tell that these guys still possess the hunger and drive to deliver a great show. The sound is superb and nicely crisp, which is just the way I like my live albums to sound. The setlist digs deep into the band’s past in that songs such as «Into the Fire» (one of my favorites by the band), «Hard Lovin’ Man», «No One Came», «Black Night», and «Hush» are all included. Just listening to the phenomenal rendition of «Into the Fire» gets my dick hard, let there be no doubt about that! Apart from classic cuts such as «Highway Star», «Lazy», «Perfect Strangers», and, obviously, «Smoke on the Water», the setlist largely consists of new material off the «Now What?! Album, and those songs all sound better live compared to their studio counterparts, which is one of the reasons why I really dig «From the Setting Sun…» so much. The only track that I do not like is that short «Contact Lost» piece off that dreadful «Bananas» album. While all the members of the band are right on the money, the one that deserves the most credit is actually Don Airey (keyboards). That guy simply rules and is so underrated that it fucking hurts! Truly an asset to Deep Purple. His control of the keyboards just blows me away.

As to the DVD, it is nicely shot and the sound is superb, but visually there is not a whole lot of stuff going on, which has always been the case with Deep Purple in my opinion. Not that they are not charismatic om stage or anything, but I just prefer to listen to the CDs as opposed to watching the DVD. If you were there when this was recorded then the DVD will probably rule. All in all this release is most definitely a worthy addition to any Deep Purple fan’s collection.

HAREM SCAREM – Live at the Phoenix

DEEP PURPLE – …To the Rising Sun in Tokyo