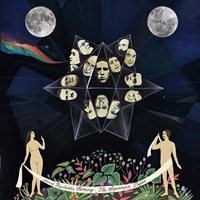 JESS AND THE ANCIENT ONES – Second Psychedelic Coming: The Aquarius Tapes

Warming up North American audiences for King Diamond certainly gave this Finnish psychedelic rock act an uptick in the profile and promotion department – as their second album "Second Psychedelic Coming: The Aquarius Tapes" hits the streets. Augmenting a sound that screams late 60’s and early 70’s with sound bites and tones that make you think of The Doors, Jefferson Airplane, Janis Joplin and others of that forward thinking, groove ilk, listeners can expect 9 songs that lift them to an alternate universe.

The sextet often catches a hook within the first 10 seconds, especially evident on the feel good, jam-oriented "In Levitating Secret Dreams" where the verses contain a lot of repetitive back and forth motions as the guitars and rhythm section hammer home a 4/4 mid-tempo foundation. Jess’ grand jester-like singing contains upper echelon feel, especially through a circus-themed arrangement such as "Wolves Inside My Head" where you get the sense that her impassioned pleas are word pictures coming to life before our eyes. Drummer Yussef leads the slow, tribal march of "Crossroad Lightning", the wah-wah pedal and keyboard underpinning a deep, eight minute plus odyssey that could be a future set list highlight. The closer "Goodbye to Virgin Grounds Forever" contains a lot of Beatles-esque whistles, serene at times, doomy for others – sprawling as a final track that encompasses one-third of the hour plus record.

Jess and the Ancient Ones will always be a cult-oriented band in terms of appeal – as this is as retro and psychedelic as many current music fans can handle, while others will be lost in what to gravitate towards. To my ears, they are focused, intent on being who they are and that’s more than alright.

HAREM SCAREM – Live at the Phoenix