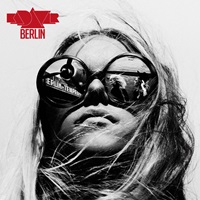 Doomy riff rock of the heavy and groovy kind is on display once again through German act Kadavar on their third studio record "Berlin". Often keeping the proceedings lean and mean and building off of a simplistic yet effective guitar foundation, you can’t help but be swept away by the retro Sabbath, Pentagram and psychedelic Hawkwind vibes contained on killer cuts like "Last Living Dinosaur" and the exotic-tinged "The Old Man".

The trio curtail extraneous jam sessions during instrumental development, preferring instead to keep the songs on point and in a timely 3 ½ to 5 minute arrangement scale – guitarist / vocalist Lupus Lindemann adept to the task of performing in clean or distortion filled energy while his singing contains that ripe plaintive nature to allow the words to flow like vintage wine. Those who love wah-wah guitar action that goes hand in hand with the vocal melodies will find "Pale Blue Eyes" delectable, while "Circles in My Mind" just has that breezy comfort to make heads bob and toes tap instantly.

Knowing that this retro-style is certainly entering burn out phase for some, do not discount Kadavar’s ability to deliver the goods on a live front – as personally witnessing them stun a festival crowd in New England a couple of years back made me a true believer. If you tire of the known doom hard rock/ psychedelic favorites and desire something with substance in the bluesy groove 70’s department, "Berlin" is ideal to get your music fix.