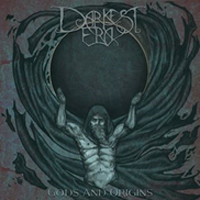 Up next is this latest EP from Irish epic metallers Darkest Era. If you checked out their 2014 release ‘Severance,’ you already know how good these guys are and don’t need me to tell you. Darkest Era sound something like Slough Feg or Solstice – traditional metal with a bit of Celtic Folk thrown in. While all of the guys know their way around the instruments it is Dwayne Maguire aka Krum’s vocals that really stand out. His range and melodic abilities are pretty astonishing. ‘Severance’ was such a fantastic release because each of the eight tracks lined up and hit you in the jaw on the way past. Since this EP only has 2 tracks, the consistency isn’t going to wow the listener and that won’t happen. Both of the tracks are a bit unassuming and even slightly underwhelming compared to ‘Severance’. Yes this is a good listen, but  I can’t see it converting too many who don’t like the band already, and as I always say, if a band is only going to release a couple of tracks at a time, then really they should be the strongest possible offerings.

Do check out Darkest Era at some stage, whether or not this EP tempts you.