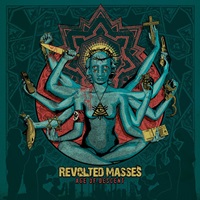 Hailing from Athens, Greece, Revolted Masses started in 2008 and have released a couple of demos plus a debut album "Us or Them" in 2013 before signing to Inverse Records. "Age of Descent" is the follow up full-length, an 11 track effort that straddles the modern thrash/death tightrope in terms of attitude, caustic vocals, vicious riffing and tempo annihilation. Much of the lead break work from Vaggelis Theodorakis and Kostas Karvounis-Zoumpos has a jazzy, free flowing intricacy while still being perfectly suited to the guitar parts and arrangement at hand.

Musically there’s everything from blitzkrieg blast beats and furious speed picking right into a more militant, modern mid-tempo stomp passage that takes "Waltz for the Fallen" into material that both thrash and death maniacs will love. Vocalist George Stefanis has one of those gritty roars that demands attention, reaching back into crossover hardcore meets thrash delivery during "Bloodshed in Eden" while maniacal and psychotic during the equally shape shifting "Flesh Inc.". The band never forsakes musicianship for solid songwriting hooks and groove elements – very much aware that retention is the ultimate goal to achieve for Revolted Masses to gain a bigger following.

The production is crisp, possessing a snare snap that will not be soon forgotten – and as a result "Age of Descent" could be a record that sneaks up into people due to its dynamic energy and semi-progressive stance amid all the modern thrash/death elements. Perfect for those who love Euro-thrash meets say Hate Eternal and fancier guitar licks/ tricks during the instrumental sections.

SAFFIRE – For the Greater Good