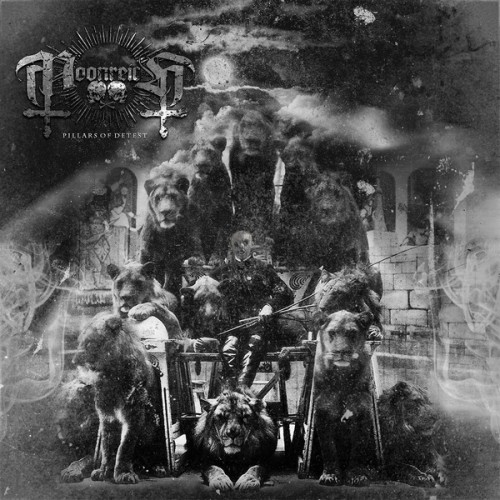 Moonreich is a French black metal outfit whose sound and aura is quite similar to what is generally referred to as orthodox black metal. These guys even had their album mixed and mastered at Endarker Studio by Magnus "Devo" Andersen (Marduk, Funeral Mist, Ofermod, etc.), but in case you were wondering that is a good thing as "Pillars of Detest" certainly packs a punch. This is some powerful stuff, you fucks. Also, Moonreich does not come across as some cheap clone band or an indifferent musical entity devoid of any substance. While the music is often dissonant and a little uneasy on the ear, the 8 hymns that contitute the album are sickeningly morose and hauntingly morbid, which leads back to what I just said about the dissonant nature of the music and how that affects the overall mood of the album.

The riffing is insane at times, the song structures and arrangement are both chaotic and beautifully orchestrated, and the musicianship is excellent. There is a lot of technical stuff going on throughout, but not in the sense that these guys are trying to show off or impress you with their abilities. Rather, this is the kind of album that you can listen to many times over and continually discover new aspects of. Moonreich also knows how to vary its music and write dynamic tunes. While the music is often furious and raging, quite a few mellow and hypnotic riffs and melodies creep in from time to time. You have to pay attention and you have to be patient when it comes to unlocking songs such as "Long Time Awaited Funeral" and "Death Winged Majesty".

Truth be told, "Pillars of Detest" is not really innovative as such, but it oozes quality from start to finish, and while bands such as Deathspell Omega, Temple of Baal, and Panchrysia occasionally come to mind when listening to Moonreich, I would argue that the band has a sound and identity of its own. If you are into black metal then by all means explore this album. It will pay off. And before I forget, the album artwork rules, too.