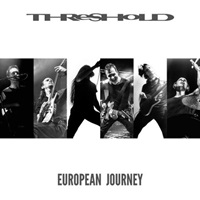 UK progressive metal act Threshold has quite a potent discography over the decades, but probably is one of those bands that flies just under the radar. They may not be the most technically sophisticated or intricate outfit – instead preferring to offer versatility through their attention to dynamic songwriting and respectful musical interplay. So those uninitiated to the sextet’s style would be well advised to start with "European Journey", a double live album that encompasses 15 songs and close to 2 hours of material.

Vocalist Damian Wilson has been back since the tour in support of "Dead Reckoning" 8 years ago, and his rich texture gives "Slipstream" and "The Hours" that lilting comfort as the time signatures change and the instrumental sections captivate. Their latest studio album "For the Journey" receives decent air time with four tracks, but surprisingly Threshold wait until song five for your first taste with "The Unforgiven" – and keep one of the epics "The Dust" for the latter stages of the evening. Of course a healthy selection of the last four studio albums is what "European Journey" focuses on, but it’s nice to see them belt out "Long Way Home" off 2001’s "Hypothetical" as well as "Part of the Chaos" from 1997’s "Extinct Instinct" that appease the ardent long-timers.

The layers of sound from keyboardist Richard West, guitarists Karl Groom and Pete Morten, plus bassist Steve Anderson give your ears a number of focal points to concentrate on for retention and hook assessment – occasionally introspective for "Coda" or driving meets brooding for "Mission Profile". Threshold do not dazzle in a Dream Theater way, they prefer instead to just lock and load into a series of parts and embellish accordingly, assembling songs logically so as to not lose the listener. Drummer Johanne James deserves kudos too for keeping the material groovy while flashing exemplary timing and fill skills as necessary – coordination of the highest order.

Threshold continue to chart their own destiny, and that’s to be admired and respected in the progressive rock/metal community. "European Journey" is a fine live document to treasure.