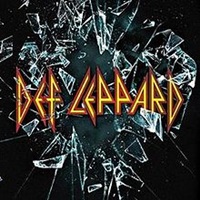 The popular hard rockers known as Def Leppard are back with a brand new album simply entitled "Def Leppard", and I dare say that many of us have anxiously and eagerly awaited a new proper studio release by these guys. The last one, "Songs From the Sparkle Lounge", came out way back in 2008, and that was a less than stellar effort, musically speaking. Luckily, this 2015 opus of theirs is way better than its predecessor. Having said that, I must admit that I expected quite a lot from this new output of theirs. I attended one of their shows with Judas Priest back in June and Leppard totally ruled that night, so I guess I got it into my head that all that energy and intensity would somehow be channeled into their next album. I was partly right, because there are some truly well-written and kick-ass tunes to be found on the disc, namely the Queen-inspired "Man Enough", the catchy "Invincible", the varied "Sea of Love", the moody "Battle of My Own", and the brilliant "Wings of an Angel", just to name a few. On the other hand, songs such as "Energized", "Broke ‘n’ Brokenhearted", "and "Last Dance" leave something to be desired, which is a shame, because the album loses its momentum here and there. The album opener, "Let’s Go", is somewhat mediocre, and that pretty much goes for the album closer, "Blind Faith", too.

Joe Elliott still possesses a great and strong voice, and Viv Campell, Phil Collen, Rick Savage, and Rick Allen are all right on the money and fucking deliver. There can be no two ways about that. They are all great musicians. But again, the album is a bit uneven and a few filler tracks rear their ugly heads from time to time. In the overall perspective, "Def Leppard" is a good album and well worth spending your hard earned nickles on, but it could have been trimmed a bit in places and made more cohesive, more coherent and solid. Having said that, the album is certainly varied and the band members sound inspired most of the time, so I dare say that there is something for everybody to revel in.