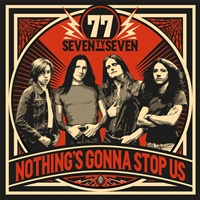 This Barcelona, Spain quartet on album number four elevate their profile to Century Media on their fourth studio record, appropriately entitled "Nothing’s Gonna Stop Us". Bon Scott-era AC/DC factors heavily into their three chord, blues based hard rock sound – right down to the sarcastic, personality filled melodies from rhythm guitarist Armand Valeta. You’ll be hard pressed to not stomp your feet and clap your hands to high voltage offerings such as "It’s Alright", the insanely catchy "Come & Join Us", or back room boogie antics for "Tightrope".

They do extend a little bit of versatility into Thin Lizzy territory during "Nothing’s Gonna Stop Us Now", as bassist Guillem Martinez banters about this swinging bottom end that allows drummer Andy Cobo to hammer home that old school tempo flow as Armand and his brother LG transition between a series of happier chord progressions. Only one of the twelve tracks clips the four minute mark, so chances are rare that the opening hook doesn’t meet your approval – and if it does, ’77 quickly moves on to the next arrangement that should aurally and mentally connect if you are a fan of that 70’s retro hard rock feel. Another highlight "No One Like You" gives me a feeling of the early Tom Petty discography – although the bluesy lead break contains a warmth you rarely hear from most young musicians today.

Working class hard rock that doesn’t beat around the bush – ’77 tackle their 1974-1979 influences and make a compelling case for the student outdoing the teachers most recent output (have you been cranking a lot of "Rock Or Bust"?). Crank this up to 11 ladies and gentlemen.