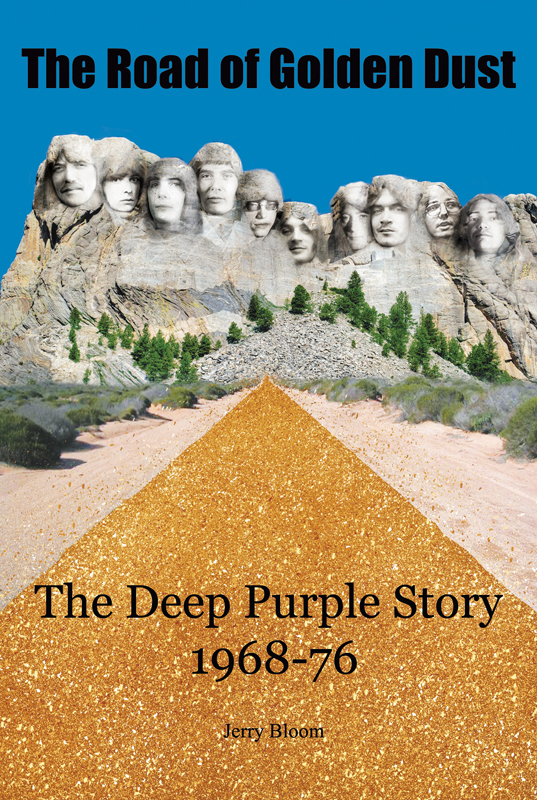 I thoroughly enjoyed author Jerry Bloom’s previous book on the mighty Deep Purple, the one entitled "Deep Purple: A Matter of Fact", which was published earlier on this year. While the aforementioned book was filled with funny anecdotes, strange tales, and obscure facts relating to Deep Purple, "The Road of Golden Dust: The Deep Purple Story 1968-1976" is (as its title suggests) a biography chronicling the first two decades of the band’s existence, which is to say the most creative and important eras of Deep Purple. Fortunately, Bloom goes a little further back and tells us a bit about where the different members were born and what their upbringing was like and so on. He also relates why the members of Purple decided to take up an instrument when they were kids and how they eventually turned into world-class musicians of the highest order. Their musical upbringing, their different sources of inspirations way back in those formative years, and the many bands and outfits they were each part of before they eventually found each other and formed Purple is touched on. Very interesting stuff. However, this excellent piece of literature does primarily focus on the first eight years of the band’s existence, which, as I said before, truly is the golden age of Deep Purple from my perspective.

As I pretty much anticipated, no stone is left unturned by Bloom and we get to read all about the ups and downs throughout those years: the triumphs, the tragedies, the line-up changes, the arguments, the grueling tour schedules, the surreal creative peaks, and so on and so forth. I must say that Bloom has done an amazing job, not only in terms of the research on which this book partly rests, but also with respect to his particular way of chronicling events as well as his style of writing. There is a certain warmth and depth to this piece that is quite touching at times. It has substance to it. You can really tell that Bloom is a fan and that he loves Purple, yet he remains sceptical of some of the choices made by the band and management during those years. In other words, Bloom has a very balanced outlook on the band and he has this gifted way of putting things into perspective. On top of all the interviews that Bloom himself has conducted with certain members of the group over the years, a number of different quotes and citations from other interviews and biographies relating to Deep Purple have been incorporated into the narrative in a highly tasteful manner. This not only adds weight to certain views and opinions that are expressed throughout the book in different contexts, but it also ties in with what I stated about Bloom’s work having a sense of balance to it. Unlike a lot of other biographies, "The Road of Golden Dust" is neither one-sided nor one-dimensional. Also, I must say that I found it somewhat amusing and interesting to learn how some of the members tend to view a few things in retrospect, especially with regard to the criminally underrated "Come Taste the Band" album and Tommy Bolin era.

As with "Deep Purple: A Matter of Fact", Bloom’s latest literary output is an all-around interesting, captivating, and fascinating piece of work on one of the most important musical groups of all time. "The Road of Golden Dust" retains its focus from beginning to end and the quality never waivers. The chapters are well-written and everything flows along nicely. I had trouble putting it down once I started reading it, and there was a ton of stuff within its pages that totally took me aback and had me going "What the hell?". If you are even remotely interested in Deep Purple then you owe it to yourself to check this excellent book out.