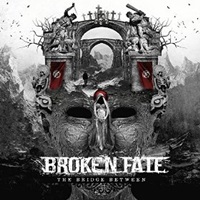 BROKEN FATE – The Bridge Between

This Swiss quartet has an age range in its membership from 28 to 45 – so as such, we really shouldn’t be surprised that Broken Fate has its musical style wedged between the past and the present for their debut album "The Bridge Between". Straddling the lines of classic thrash and modern metal, certain tracks have that finesse and crunch that takes you back to the driving Bay Area days when Metallica and its offspring ruled the underground – while others possess a little bit more of that radio oriented stomp and groove that can be prevalent in Five Finger Death Punch and Nickelback.

Guitarists Tobias John Bänteli and Roman Lesser team up for a formidable riff parade, putting in some heads down crunch measures that surely will stir many a pit – even if they may nick an occasional familiar refrain such as "Holy Wars" during part of the instrumental section of their own title track composition. Broken Fate know how to alternate for dynamic continuity in terms of the pacing – as occasional longer numbers like "Thorns of a Rose" and "Take You Away" intertwine either more frantic instrumental sections or occasional quieter nuances to build the impact of the next hook or tempo change. The fact that the band choose to release 14 tracks ("Layla" is a bonus for the digipack consumers to make it 15) could be a 50/50 proposition for appeal, as interest for this journalist starts to sag very quickly around the 50 minute mark. Best in my opinion to leave them wanting more than overstaying your welcome, even in a marketplace where release dates between studio records are longer.

The rhythm section keep the material grooving and pounding, so the overall appeal for "Your Night" and the Metallica-like "Fall of Serenity" is positive. Broken Fate should gain a modest selection of old school fans, while probably getting a decent amount of young metalheads who could spread the word about their modern thrash attack.