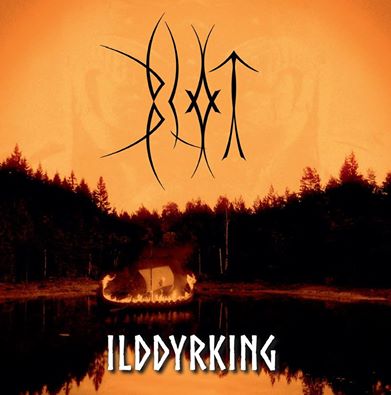 The Norwegian band named Blot recently released its first proper full-length album entitled «Ilddyrking», and I must say that I was pleasantly surprised by this 10-track slab of epic viking metal/black metal/pagan metal. Since I was not familiar with the band at all prior to receiving and listening to this brand new release of theirs, I had no idea what to expect really, but let me tell you straight up right here and now that this album oozes quality and great musicianship. While some Viking and pagan metal bands sound like a bunch of weenies, Blot is something else entirely.

The songs that constitute «Ilddyrking» are all quite diverse and dynamic. The tempos vary, the riffs and melodies are catchy and evoke a sense of the sublime, the sound is punchy and heavy, and the band as a whole sounds tight and focused. While the vocals could have been slightly more varied, the album as a whole is highly atmospheric and nicely arranged. It is neither boring nor tedious in any way. Sure, «Ilddyrking» is not exactly innovative as such, but the band has a sound and an identity of its own, which is more than one can say about a lot of other bands out there today. By the way, the album closer is a cover of Dissection’s «Where Dead Angels Lie», which, although not fantastic, is a decent (re)interpretation of that old classic tune.

There is a lot of talent and potential on display here, and it will be interesting to follow this band in the future. «Ilddyrking» already sounds refined and massive, and this is the band’s debut album we are talking about here, for crying out loud. Who knows what these guys might accomplish in the years to come? If Viking metal/black metal is your thing then I suggest that you immediately check this release out. It should be available digitally as well by the time you read this.

BROKEN FATE – The Bridge Between