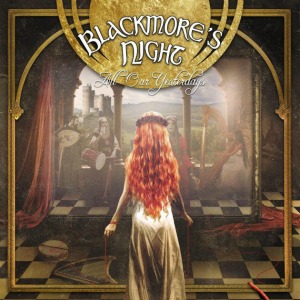 BLACKMORE’S NIGHT – All Our Yesterdays

When legendary guitarist Ritchie Blackmore laid the mighty Rainbow to rest in 1997 in order to focus on his medieval and folky musical project named Blackmore’s Night, quite a few of us were somewhat surprised (or shocked, as it were). However, Blackmore’s Night has turned out to be a somewhat productive and creative force ever since its inception nearly twenty years ago, and 2015 marks the release of the band’s 9th studio album.

"All Our Yesterdays" is a bit of a mixed bag in terms of quality. While some tunes such as the title track and "The Other Side" are incredibly catchy and moving, others such as "Coming Home" and "Long Long Time" simply lack the depth and substance to make them good songs. Sure, there is some decent material on display throughout the disc, but quite frankly I expected more than decent material from Blackmore’s Night. The cover versions of Mike Oldfield’s "Moonlight Shadow" and Sonny and Cher’s "I Got You Babe" are forgettable and nothing to write home about.

The album does have its moments and a handful cool songs and so on, but it possesses neither the haunting quality of "Ghost of a Rose" nor the lively vibe of "Secret Voyage". Simply put, "All Our Yesterdays" is a bit of a letdown. Too uneven and a tad too many mediocre songs, unfortunately.

BURN THE MANKIND – To Beyond