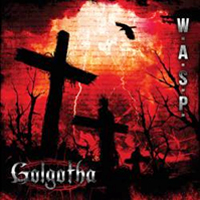 If you aren’t already familiar with WASP and convinced of their pedigree, chances are that you are on the wrong website. They have been around since even the oldest metallers were in their teens. Think about it – Blackie Lawless is now almost hitting 60 and his songwriting influences hark back to Ray Charles and the Rolling Stones, to a time before metal had even crawled from the primordial ooze. They have been a part of the metal education since the 80’s and although they have had their dodgy moments such as circus themed guitars, white-tassled boots and alcohol abuse, they have come out black-clad and ready for action, purged by the fires of their own experience.

‘Golgotha’, the band’s 15th full-length release carries on a run of great albums that stretches with one or two blips right back to the mid 80’s. Ok, the first thing to note is that the quality of the tracks on offer isn’t entirely consistent – but in this case there is a good reason for that, to which I will come soon. Some of the tracks, such as opener ‘Scream’ feel a bit lighter and more radio friendly than I like. The darkness of some of the earlier albums seems to have dispelled somewhat, perhaps due to Blackie’s faith. Having said that, there is no denying how well put together each track is. Many of these songs have been worked and reworked for years now and it really shows. Quite simply, there aren’t many bands out there that can put such polished, catchy, rocking metal songs of this quality out there.

The big reason for the inconsistency in quality though, is the tracks ‘I Miss You,’ ‘Fallen Under’ and ‘Golgotha.’ Starting with ‘I Miss You,’ – I never thought that WASP would ever write a song that could compete with ‘Sleeping in the Fire,’ (easily one of my favourite songs of all time and still home to my fave solo ever) but they have done it here. I only hope some of you out there had a chance to catch them doing this one live on their recent tour. This is followed by the simply amazing ‘Fallen Under’ which, rather incredibly does not suffer in comparison to its predecessor. Album closer ‘Golgotha’ runs to almost 8 minutes in length and is as good an epic as WASP have ever penned.

So there you have it. Probably album of the year and contains some of the best music WASP have ever written. Epic.