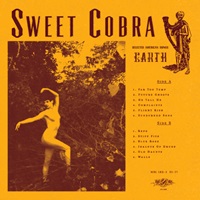 This Chicago based band return with their first full-length since their 2010 "Mercy" release, but this is my first foray into the trio’s infectious, heavy sound. Sweet Cobra has a jangly nature to a lot of their tempos and riffs, almost alternative in a post-alternative meets heavy / stoner hard rock manner. Bassist Botchy Vasquez uses a more rhythmic vocal approach on a potent energy burn number like "Future Ghosts", while his low end churn in tandem to drummer Jason Gagovski provides a lot of doom and gloom atmosphere to the impassioned follow up "He Tall He".

At other times the band have a little bit of playfulness and swing to the music, almost as if embodying a lot of The Cure or Depeche Mode into the fold, while still maintaining a lot of stirring guitar movements. Check out the quick hitting "Complaints" for this aspect – as if Jane’s Addiction and Quicksand were going to careen against this alternative, echoing landscape for quite the show stopper. "Repo" is another intriguing number, the tempo almost reminiscent of the California 60’s sound as Botchy keeps his melodies very serene and the background vocals have a lullaby-ish quality.

"Earth" has 12 tracks that could easily jump from studio to the stage – Sweet Cobra seems like they would be quite an explosive act to take in live. 45 minutes later, most will want to return to the beginning for a deeper appreciation. Those who love a mix of stoner hard rock, alternative music, and the rawness of post-punk could find Sweet Cobra worth sinking their fangs into.