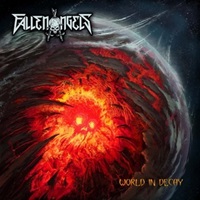 Here we have a Seattle, Washington quintet in Fallen Angels, active for 13 years and releasing their third full-length album with "World in Decay". Melodic thrash is their calling card – intertwining a number of Bay Area influences from Metallica to Heathen and creating a thick rhythm-oriented sound with dazzling musicianship, galloping tempos, and stunning lead breaks in mind. Vocalist Brad Kennaugh has that evil snarl necessary to spit venom in "Forsaken Existence", or more controlled in a mid-tempo offering like the follow up "Leading the Blind" – James Hetfield and his offspring definite influential in his outlook.

Acoustic guitars often add a little bit of dynamic contrast – the first 1:18 of "Fire at Eden’s Gate" for instance showcases seasoned feel and tastefulness before the electric proceedings kick in and bassist Carl Larsson gains equal footing in the sonic landscape. Drummer Steve Spitzbart prefers to use a lot of traditional metal maneuvers and let the double kick do a lot of his speed work – one listen to "Into the Abyss" makes that very clear. Fallen Angels strength lies in the dual layers of guitar interplay that Erik Hanson and Matt Be Roth provide – it’s evident that they know their instruments and theory inside and out.

"World in Decay" may not possess that immediate wow factor that say Testament or Overkill can deliver, but there’s something to be said for a group who constructs material in such a way as to be melodic, traditional, and thrash-oriented. Fallen Angels are the type of band that probably win over converts live- and can assemble solid songs in the studio. Old school maniacs should savor this.