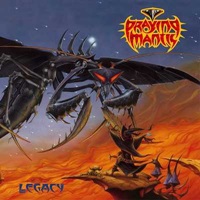 Transformation appears to be an expectation when it comes to legendary bands who have decades in the books career-wise. The UK classic melodic hard rock/metal band Praying Mantis is no exception, as "Legacy" their latest studio album has two new members in the fold: vocalist Jaycee Cuijpers and drummer Hans in’t Zandt. As long as brothers Chris and Tino Troy are involved (and have been since their 1974 start), most will accept Praying Mantis in any incarnation – so the quintet filled out with guitarist Andy Burgess release their first album in 6 years with "Legacy".

Those who love a strong AOR sheen with their melodic hard rock will savor these 11 songs. Jaycee’s range is one that recalls Robin McAuley meets Joey Tempest, rich and full of confidence on commercial numbers like "All I See" as easily as the more engaging numbers like opener "Fight for Your Honour". Keyboards play an equal role to set up the mood of individual tracks – the band knowing that it’s important to be softer in spots and build up the harmonies for proper, long term engagement. Check out "The One" and the pitch bending, swift finger action during the lead break for "The Runner".

You can understand the long-running appeal of Praying Mantis in the Far East- especially in terms of the tight twin guitar harmonies during "Fallen Angel" or paying homage to the capital of Japan in "Tokyo". "Legacy" will make many think of the classic mid to late 80’s AOR days when American bands ruled rock radio – it’s infectious, musically sharp, and entertaining. Probably not for the heavier market, Praying Mantis’ creative days are still ahead and not stuck in nostalgia.