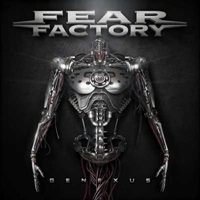 Ahead of the curve in terms of combining the industrial and computer tools at their disposal while still being aggressive in their metal stance, Fear Factory took the world by storm out of the gate in the early 1990’s. Their first two albums "Soul of a New Machine" and "Demanufacture" put them on the map as an elite, legitimate headliner, assembling a potent musical cocktail combined with the deep, harsh screams and ethereal, clean melodies of Burton C. Bell. Achieving a rock radio breakthrough later in the decade for their "Cars" cover from Gary Numan, they’ve rarely ascended creatively to those scales again- and yet not delivered anything less than a reasonably strong effort.

"Genexus" pushes the old with the more modern takes, depending on the feel of Dino’s guitar riffs and tempo direction the rhythm section chooses to employ. Early on Fear Factory push a lot of their older jackhammer principles during the verses while keeping the catchy chorus cores- "Autonomous Combat System" and "Anodized" easily could have been sitting side by side to their first two album output. Drummer Mike Heller handles the challenge of twisting his time signatures in tune to the off kilter riffs at times while still slamming home a solid, incessant groove – "Dielectric" and "Battle for Utopia" two diverse examples of where the human element outdoes any possible computer programming for the good.

Add in Burton’s always professional duality in the vocals- where I think his intuitive seasoning see him channeling more of a Robb Flynn/Max Cavalera roar in the aggressive parts beyond his stellar clean choices – and you can see that Fear Factory are still on top of their game, 25 years plus deep in their career. "Soul Hacker" for instance has a jumpy guitar construction when set against the spacey keyboards and forceful drumming could have been a hit for the band when nu-metal ruled the roost – yet with proper integrity.

Easily their best album since the late 90’s, check out "Genexus" if you miss Fear Factory at their strongest.