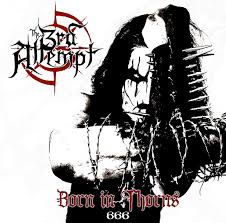 Okey, as many know by now The 3rd Attempt is a spawn of Carpathian Forest. With Tchort and BloodPervertor leaving CF because of stagnation in creativity it hits me immediatly when I see the front cover of their new album, wow looks like a CF cover and the new logo isn`t so new thinking either if I may say so. But hey, lets hear the new material from these guys. And again I get the same feeling. The first two tracks strike me as a I think that Tchort and BloodPervertor either has been very influencial in CF`s songwriting or they have taken a lot of it with them to this project. I`m not saying that it`s a bad thing, just a bit surprising how similar it sounds like what they wanted away from. I have that feeling through the entire album, but they have also taken it a step or two further. With the vocal of Kaahrl Ødemark we get something different from Nattefrost. In some parts you can feel some of the same that was in CF, but he has more width in his vocal range. After the first two tracks you start to hear that they have an idea behind this project. More variations in the tracks, some are "black ballads" some are more direct and fast. Tchorts basslines is very recognizable and the vocals as mentioned is more variable and very impressive. There`s not much effects here, some synth to complement the melodic parts and some effects/sampling on a few tracks. I will not go any deeper into the tracks as I feel that the listener should enjoy the songs and make up their own mind without to much input from me and others.

A quite catchy album. Of course the melodies does much of that, but I must say I like Kaahrl`s performance and his spectre of the vocals. He can change a track by himself.  I have drawn many lines to Carpathian Forest here, but that`s natural as they left for the reasons they did. It is a very strong debut, something you probably should expect from guys that`s been in this scene for a while. Nevertheless this is something solid to build on in the future.

Torment Nation, Dark vision, We defy and Born in thorns is my favorites here, but all tracks are actually good and strong here. They`ve signed under Norwegian label Dark Essence Records and will perform at upcoming Blastfest.

If you like Carpathian Forest and Grimfist this is your street. Listen to it anyways…. you might have a pervert inside you.