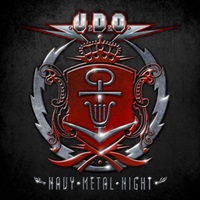 The well-known German band named U.D.O., which was formed by legendary vocalist Udo Dirkschneider upon leaving Accept, recently released this rather peculiar 2CD/DVD combo via AFM Records, and please note that the word peculiar is not meant in a derogatory sense here. "Navy Metal Night" is a live album that captures a rather special sold-out show where U.D.O. ensemble was accompanied by a German navy orchestra. The idea of combining heavy metal with a symphonic orchestra is hardly anything new or innovative, but never before have I come across a release featuring a pure no-frills heavy metal band and a navy orchestra performing together, but, to my surprise, the whole thing actually works and is quite captivating and fascinating to listen to.

Merging U.D.O. with an orchestra has resulted in a quite bombastic and epic rendering of a whole bunch of catchy metal tunes, and I must say that Dirkschneider himself sounds great all the while his band is right on the money in terms of delivering a tight and convincing set. While the song material is obviously strong enough to stand on its own, having the orchestra compliment and play with the band adds extra layers to the songs and revitalizes them a bit. Again, I am not saying that the songs in and of themselves are not strong and cool, but merely that it is highly entertaining and interesting to listen to them with an orchestra playing along. Not surprisingly, Udo sounds very inspired and one can tell that he was enjoying himself while performing that night, and, as I pointed out before, the band as a whole sounds awesome. The sound is good and all the instruments are clearly audible, but luckily the mix retains a bit of that raw edge that signifies that this is indeed a live record, and an organic and dynamic one at that. Personal favorites and highlights include "Independence Day", "Faceless World", "Heart of Gold", and "Animal House".

Even though U.D.O. has unleashed quite a few live videos and records upon the unsuspecting masses throughout the years, one could argue that "Navy Metal Night" is something else, something different, and, frankly speaking, something that is a lot more fun to listen to than the majority of live releases by countless other acts that are flooding the market today. "Navy Metal Night" is a keeper.