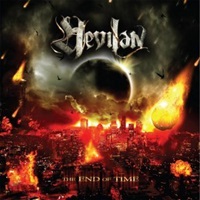 Originally hitting the streets independently a couple of years back, the debut album from Brazil’s Hevilan gains bigger distribution and promotion through Massacre Records. Deriving their name from the Hebrew word Hevila, which means full of treasures, the band has been in existence since 2005. I’d describe their sound as a mixture of progressive metal with modern down tuning and occasional traditional inflections. Special guests include current Primal Fear drummer Aquiles Priester and second vocalist Vitor Rodrigues who appears on "Shades of War", "Desire of Destruction", and "Sanctum Imperium".

Throughout the record, a distinct love for Symphony X, Dream Theater, and Nevermore appears – especially in terms of the neo-classical runs and general chord progressions guitarist Johnny Moraes employs. Main vocalist Alex Pasqualle has that grit and multi-octave power that put Russell Allen on the map, handling both sides admirably on "End of Time" or the softer, acoustic oriented ballad "Loneliness" that contains a number of symphonic background touches. Two bonus cuts recorded in 2014 give the record added life – especially when Sanctuary’s Warrel Dane appears on "Shades of War", while "Quest of Illusion" has more of a traditional Maiden/ Savatage style in terms of the riffing and flow.

There’s just something special about South American bands these days – musicians who engage the listener from a strong hook perspective while also delivering jaw-dropping technical ability in the power/progressive metal genre. Being a debut record, "The End of Time" does have a lot of obvious reference points that will need to be shed if Hevilan hopes to move up the ranks. Solid heavy metal with neo-classical tendencies, I’d be curious to hear the follow up and see where Hevilan stands a few years later.