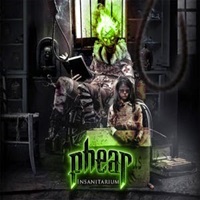 Anyone remember the Canadian band Eidolon? If you do, their early vocalist Patrick Mulock is now the singer for this Canadian metal band Phear – releasing their debut 13 song album "Insanitarium". The quintet straddle the lines of power and thrash, bringing to mind in a lot of their instrumental movements and song construction everything from 80’s era Helstar. Metal Church, and a touch of Cyclone Temple. Pat has an impressive range, very emotional and able to sustain those high notes when called for a la James Rivera on opener "Regan’s Dream" as well as give a little bit of sinister Sebastian Bach charm for "Proud".

Guitarists Tyson Emanuel and Graham Stirrett lay down a bevy of energetic licks and riff tricks, keeping things thick and heavy while maintaining proper power and thrash skills on "Don’t Scream" and the darker "Bloodline". The material is a tad longer than most in this field, as 7 of the 13 tracks clock in between 6:16-8:13, and honestly Phear isn’t exactly stacking up the parts like "Master of Puppets" Metallica to justify some of the excess. "Heaven" is probably the worst offender of this, the tranquil acoustic/keyboard intro meanders while the female guest vocals and repetitive chorus seems very radio friendly – the song very Queensrÿche -like in pacing, but struggling to maintain tight focus part to part.

By the time "Snap!" closes the album instrumentally… you have 78 minutes of material. A double album circa vinyl standards, and rarely do I think a newer band can knock out high quality songs beyond the first 9 or 10… so this is another detraction for me. In the end, I believe "Insanitarium" does have its bright moments, and Phear is a decent power/thrash band that one hopes will grow into their skin a bit more on future recordings.