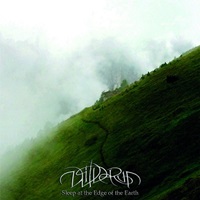 Feeling fortunate to embrace a wide variety of metal and living in a healthy local scene across the six states of New England, it’s bands like Wilderun that keep my hopes alive for metal’s future. This quartet hail from the Boston, Massachusetts area since 2008, releasing one previous full-length in 2012 with "Olden Tales & Deathly Trails". Stylistically imagine a fusion of folk metal, progressive strains, melodic death, and symphonic strains and that will give you a framework to "Sleep at the Edge of the Earth".

With 2 instrumentals bookending the main 7 tracks, there’s a lot of layers to engage with – especially when 4 of the tracks compile a saga called "Ash Memory". Everything from quieter, acoustic folk driven "Hope and Shadow (Ash Memory Part 2)" to the energetic, deathly gallop that permeates "Bite the Wound (Ash Memory Part 3)" keeps the interest going during this 20 minute plus segment of the record, Evan Berry and Wayne Ingram beyond their instrumental duties doubling up on all the clean melodies and death growls/ screams. Opeth, Ensiferum, and the majestic grace of Dan Swanö vocally comes to mind when taking in Wilderun – although there’s this sense of penetrating tranquility as the band moves through each measure, carefully constructing ideas in a way as to flow logically and not haphazardly.

The longer songs take the second half in more of an adventurous direction – "The Garden of Fire" featuring a lot of progressive death passages and incredible drumming time changes plus a super cool mandolin/banjo oriented nuance that changes the mood like a see-saw. The 11 minute plus "The Means to Preserve" opens with more sweeping symphonic/cinematic measures through the course of the up and down musical interplay – guitarists Evan Berry and Wayne Ingram lobbing about a number of runs and harmonies that keep the arrangement tumultuous and adrenaline fueled. 55 minutes later, you’ll be ready to hit repeat and seek out more of the subtleties that Wilderun place in the aural stream.

Being my first exposure to the group, I’m surprised that many of the bigger independents haven’t scooped up this act for their rosters. Based on their brief touring, Wilderun will not remain unsung for long – "Sleep at the Edge of the Earth" is a platter for the metal history books.