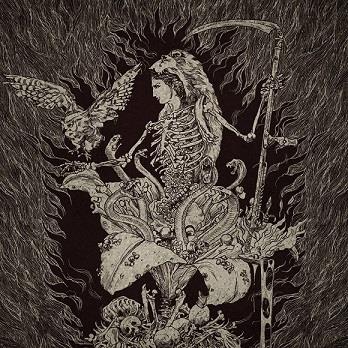 Ever since the band released the "Tranquility" EP in 2013, I have come across the name Outre many times in the underground press, but "Ghost Chants", which is the band’s debut album, is my first actual encounter with the twisted and dissonant music spawned by this Polish asylum.

"Ghost Chants" contains 7 dark and otherworldly tunes that slither and slide like a snake, which is to say that they are filled with sharp and nasty riffs, ominous bass lines, demented and varied vocals, and progressive twists and turns throughout. Nothing ever really stays the same for too long within the musical camp of Outre, and, as I pointed out before, the riffs and melodies are often quite dissonant and uneasy on the ear, but captivating and interesting nonetheless. In many ways, "Ghost Chants" sounds slightly akin to a mixture of "Kenose" by Deathspell Omega, "Written in Waters" by Ved Buens Ende, and "Ordo ad Chao" by The True Mayhem. The production is good, the band is tight, and the song material is strong.

"Ghost Chants" is a very solid album from start to finish, and I dare say that fans of experimental black metal (or "post-black metal" according to some of you suckers out there), or orthodox French black metal for that matter, will deem this morbid output by Outre a worthwhile effort. I certainly like it.