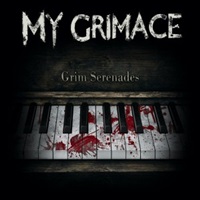 Normally worry sets in when bands try to accomplish too much genre blurring right out of the gate. Errors can come up in terms of smoothing out the songwriting and focus – fortunately that’s not the case though with Finland’s My Grimace on their album "Grim Serenades". Active since 2007, the band has released a series of demos and EP’s in the past few years, giving the sextet amply opportunity to discover their likes and approach – resulting in a record that is devastating on all fronts.

Employing dual vocals from Jere Hämäläinen and guitarist Juha Kumpulainen the group covers all the screaming and growling platforms – often working in tandem for a back and forth aggressive explosion on a song like "Dire Need". The follow up "Abandon All, Leave the Mourning Behind" has funeral oriented keyboard work in the King Diamond vein from Lasse Pirnes as the riffs and tempo straddle the doom and melodic death lines, an intriguing arrangement that can keep you on the edge of your seat for the next anticipatory transition. Occasional dipping into the metalcore genre doesn’t diminish the final product, because it’s not as if the breakdowns are obvious – check out "Reveal Nothing" for where many long time In Flames fans wish the band would go, but seem past the point of no return.

My Grimace prefers to really mix up their riffing and harmonies – not using the obvious high neck, twin guitar melody variety – and often adding in a little bit of modern thrash or groove to the proceedings that makes highlight "Drink of Death" a skull crushing experience continuously. The blood stained piano adorning the cover is another left field touch proving the band’s desire to stray from the norm.

"Grim Serenades" is an impressive debut album, and My Grimace will be a band that should make positive waves in the melodic death metal community for a long time.