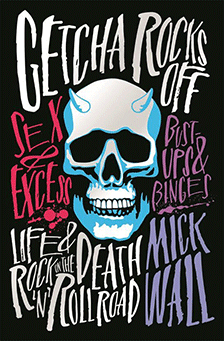 If you were reading Kerrang! back in the 80s or if you are simply fond of reading great books on awesome hard rock and heavy metal bands then there is a pretty good chance that you have either stumbled on or come across the name Mick Wall before. Wall is the author of books such as "When Giants Walked the Earth" (on Led Zeppelin), "Enter Night" (on Metallica), and "Symptom of the Universe" (on Black Sabbath), just to name a few. Back in the late 70s he wrote for Sounds before eventually moving on to working in PR and then back again to journalism (Kerrang! etc.). At one point he was even a presenter of Monsters of Rock, his own show on SKY TV, and then later on a radio programme maker. In other words, Wall has been around the block a few times and seen how the music and record industry works both within and without. His resume is most certainly impressive, of that there can be no doubt.

That Wall has been (and is) one hell of a prolific author and covered many important bands, tours, albums, and so on over the years is not even up for discussion. That is simply a fact. However, his latest literary opus, "Getcha Rocks Off", is something else entirely, or, rather, something different to the usual rock biography. Simply put, the book focuses on his own life and endeavours, and let me tell you; this is not only a brilliant and entertaining book, but also a captivating and in some strange way even inspiring read. How am I to even sum up or describe what this book contains or focuses on? Well, for one thing, what really fascinates me is that everything is viewed from the perspective of a writer//PR man/TV presenter/radio host as opposed to that of a musician or a band. Wall recounts what it was like being a part of that whole rock star scene and milieu back then when bands and musicians such as Def Leppard, Motörhead, Iron Maiden, Ozzy Osbourne, Metallica, Megadeth, Guns ‘N Roses, Mötley Crüe, and the likes ruled the airwaves and sold a shit-load of records. Granted, some of them still do, but the 70s and 80s were different. "Getcha Rocks Off" is filled to the brim with insane and inhumanly funny anecdotes and stories relating to a lot of those bands and musicians that we all love and cherish, but also somewhat tragic accounts of lives lost, mental breakdowns, loneliness, longing, and self-destructive tendencies. Everything is laid bare, which is to say that Wall tells it like it is and does not sugarcoat anything. The fast women, the rock ‘n’ roll music, the booze, the drugs, the groupies, the triumphs and defeats, the glory and madness, the sheer insanity of hanging out and partying with rock stars at fancy hotels or backstage, and the horrible but inevitable hangovers. Wall is frank, and while some readers might be offended by certain passages and perhaps even find some of the stories slightly immoral, I found the entire book extremely refreshing to read. It is just totally different to the usual run-of-the-mill rock biographies that are constantly released. This is the real fucking deal. Brutally honest and serious, yet loaded with humor, irony, and sarcasm. As you can probably tell, I really dig Wall’s style of writing and his way of presenting things. "Getcha Rocks Off" is simply told in a very lively and vibrant manner, for lack of a better term.

In summing up, Wall has produced a great piece of literature that is both moving and shocking. This book will take you to the edge and have you stare into the abyss, and the best/worst part is that you will probably love it and beg for more once you are done reading this captivating and fascinating memoir. I had trouble putting it down, and if you are looking for an apocalyptic, mindblowing, and entertaining biography then "Getcha Rocks Off" is the way to go. Highly recommended.