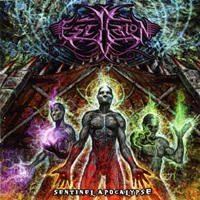 While New England may be well known on the universe for its metalcore development, there is just as potent a technical death metal scene lurking for those who wish to seek it out. Drummer Darren Cesca has the most notable experience under his belt – working with acts like Arsis, Vile, and Incinerate among others. Eschaton is a quintet split between CT and MA for its membership, and "Sentinel Apocalypse" is their 11 song, 41 minute debut album that contains a dizzying display of frantic riffing, shifting tempo and time changes, as well as the requisite death growls, screams, and palm muting necessary to appease all tech death mavens.

The guitars often have this deeper, melodic layer against the conventional brutal riffing, making "Immortal Mutilation" one of the instant pit approved cuts three songs in. The band willingly push bassist Pat Pattison front and center at times, an equally intricate bottom end player that makes "Achromatic Reign" similar to what one would expect from Veil of Maya or The Faceless if thrown through a little bit of a semi-mid-tempo filter during the transitions. Darren’s double bass and snare blasts must make the man sweat off pounds per recording session, be it throwing down exhilarating energetic salvos in "Animus" or death meets thrash rolls in "The Beast Is Embedded".

Eschaton are on their way to success because not everything is played at breakneck speed – the band understand the need to inject a little bit of down to earth riffing and musical interplay to help the intricate technicality stand out even more. The title track at almost 7 minutes contains some of the most beautiful lead breaks – plus concludes on a tranquil, almost atmospheric note. Unique Leader picked wisely in putting Eschaton on their roster – check out "Sentinel Apocalypse" for your newer tech death fix.