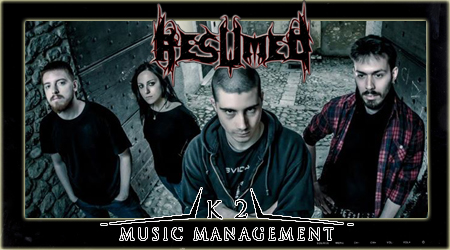 Today Resumed, K2Music and Eternal Terror have teamed up to present the exclusive premiere of a new Resumed playthrough video featuring Giulia Pallozzi on bass.

The track, "Predicting The Future," is from the Italian technical death metal band’s debut studio album, Alienations, which was released late last year via Bakerteam Records.

Founded in 2007 with the name Holy Terror, Resumed produced their first demo under the new moniker in 2009, which eventually led them to the completion of the band’s debut album ‘Alienations’. The following year saw Resumed focusing on their live activity and, in the meantime, signed a deal with Bakerteam Records for the release of the album. ‘Alienations’ is a massive piece of old-school technical death metal, enriched with many musical contaminations coming from jazz, fusion, funk and latin music, progressive atmospheres and "virtuoso" playing. A set of 8 tracks, each song deals with a particular distortion of the human psyche. ‘Alienations’ was produced by the band’s own drummer Filippo Tirabassi at FG Music Studio and in Sulmona, Italy. The album came out December 1st, 2014 via Bakerteam Records.