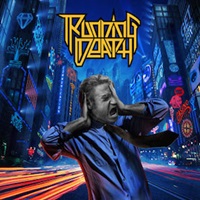 Hailing from Germany, Running Death are not your proto-typical metal act even if the name seems very familiar. Active since 2004, they’ve slowly assembled three releases (one demo, two EP’s) before finally signing with Punishment 18 Records to record/ release their debut album "Overdrive". The 10 songs in the main (outside of the quieter 1:07 "It Lives" intro and 1:23 "Deludium" acoustic interlude) showcase a quartet who possess stellar playing ability and a brand that is speedy and technical while also maintaining a lot of thrash principles at heart.

Some of the quick hitting half time stop starts and rhythmic nature to the riff pulsation reminds me of Annihilator meets early Metallica or Znowhite, check out "Hell on Earth" and the manic bass/twin guitar gallop meets Middle Eastern feel for "Pray for Death" and understand these guys mean heads down serious business. Guitarist Simon Bihlmayer handles the main vocals, which isn’t the easiest thing given a lot of the intricate axe play going on with fellow guitarist Julian Gruber, but his sneering overtone has a lot of old Dave Mustaine edge which works seamlessly on highlights like the Annihilator-ish "Remote Controlled" and speedier title cut.

Where Running Death separate themselves from the pack is the melodic aspects that shine during a lot of the mid-tempo arrangements. It’s important to be heavy of course, but ultimately fans need certain hooks to hang their fists in the air to, and "Overdrive" is chock full of those parts from front to back. You even hear a little bit of Kreator at times circa "Coma of Souls" or Toxik in terms of the pacing and musical interplay, so rest assured that these Germans are not stuck in emulating all of the obvious Bay Area acts of the 80’s.

This could be a hidden gem, unearth the diamond in the rough as "Overdrive" is a varied semi-technical thrash smash to these ears.