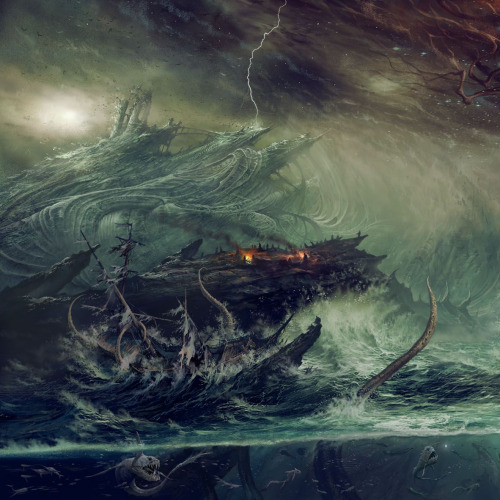 SULPHUR AEON – Gateway to the Antisphere

"Swallowed by the Ocean’s Tide" was a great debut, in retrospect perhaps a little disjointed (never my giving it a 5.5/6 on Imhotep’s site) but back then it seriously moved me. As it is often the case by reason of prolific nature of metal market, I forgot about Sulphur Aeon (SA) so when I had the opportunity to download this new effort, the memories of the debut revived. I only needed two spins to realize that this is a vast improvement over the debut in terms of songwriting, momentum, sound and atmosphere.

This time, SA seems to have delved deeper into the Scandinavian melodic death the likes of Amon Amarth or perhaps also of SA’s countrymen Heaven Shall Burn (Titans Rise, Calls from Below) as well as black metal flavor of Dimmu Borgir (Abysshex), while for the first time employing doom (Devotion to the Cosmic Chaos) where I got a feeling as though I were listening to My Dying Bride. The Behemoth meets Nile in such a tight embrace you can’t tell one from the other riffs are there, just listen to "Calls from Below" or "Abysshex", as is the melodic fragrance of Hypocrisy, particularly strong in "He Is the Gate", and the complex "cold" riffs are sometimes reminiscent of Deathspell Omega or Immolation, while particularly "Calls from Below" has that Ulcerate paranoia to it, but Sulphur is already forging their own style where death, black and doom metal coexist better than Christians, Jews and Muslims do in Jerusalem.

The album, as any great musical offering, reveals itself gradually to you and the catchiness that wasn’t quite as immediate on the first album here is much more evident, the insistent earwigs "Titans Rise" or "Devotion" will become in your ears. What happens in the aforementioned in "Abbyshex" at the end is pure black metal (complete with the "rrhaaaaaah" pronouncement as if Shagrath himself uttered it) but only moments later Behemothian riffs assure me that I am back into death metal pastures, and the opening of the subsequent "Diluvian Ascension" recalls Asphyx from their eponymous effort. This interplay of styles and flavors bolstered by delicious melodies in between is what makes this album such fun to listen to.

I have a new way of reviewing whereby more complex work must mature in my ears to be properly evaluated and obviously, since I am writing this review, it is ready, but it refuses to leave my car or iPhone because I keep finding more to enjoy about it. Accordingly, since it is overall better than the debut, I should rate it higher, but at the time my scoring was a little off for various reasons I don’t intend to bore you with, so I believe a 5/6 is fair enough. Highly recommended.