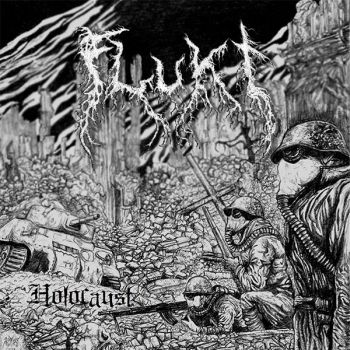 Flukt is a Norwegian black metal outfit consisting of two members, namely A.Ø and F.H, and the band was spawned quite recently, which is to say 2014. Musically speaking, there are quite a few parallels to the early wave of Norwegian black metal on this four track EP entitled «Holocaust», and although it can hardly be deemed an original or innovative release it does have its merits. First of all, the songs are quite varied and dynamic, and the EP as a whole has a suitably sinister mood to it that appeals to me. The four songs entitled «Frontline Brutality», «Dødens Rike», «Tomhet», and «Holocaust» all thematize and focus on war, military history, and death, which is quite cool. One could argue that the songs are quite simple and direct somehow, but I think that is exactly what Flukt were aiming for. Nothing convoluted, progressive, or technical. Catchy and aggressive black metal tunes are the order of the day here, ass-wipes!

It is quite evident that a lot of thought went into composing and arranging the four pieces that constitute this EP, which entails that Flukt does not sound like some cheap third-rate copy of Darkthrone, Gorgoroth, or Taake in my book, although the music does indeed lean a bit toward the musical territory ruled by those three aforementioned giants. «Holocaust» contains a lot of potential and it will be interesting to see and hear what Flukt will vomit forth in the future. Recommended if Norwegian underground black metal is your cup of urine.