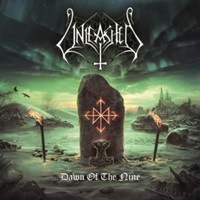 UNLEASHED – Dawn of the Nine

One of the original ‘big four’ of Swedish death metal, Unleashed appears unwavering in their Viking-oriented outlook for their latest studio album "Dawn of the Nine". The quartet live in the comforts of a particular, established style – keeping much of the material mid-tempo and chugging along in a death groove that fuels pit action or unison head banging. Leaving extended build ups or atmospheric intros at the door, "A New Day Will Rise" features an interesting, semi-jazzy solo break amidst the standard high end trills and steady riff onslaught. Blast beats appear in the follow up "They Came to Die", but often the transitions equal just as much chill bumps because of the heaviness and battering ram approach the arrangements take.

Bassist Johnny Hedlund places as much emphasis on being clear as he does portraying the evil growler as a vocalist – and not as easy you may think to pull off, but this works on highlights such as the speedier, almost Mercyful Fate-ish "Where Is Your God Now?" and the slower, bottom-end churning "Land of the Thousand Lakes". The longest track is the 6:41 title cut, with many of its marching strains (especially during the extended solo section) dipping back into the 70’s Black Sabbath archives paying homage to "Children of the Grave". Keeping the 10 songs in a tight 44 minute window ensures multiple playbacks without exhaustion, and I also love the green and grey color scheme on the cover – dark and dismal but different enough from the normal red/black covers we’ve seen through the years.

"Dawn of the Nine" isn’t going to be the most intricate death record of 2015 – or provide loads of jaw dropping/ stunner moments. Unleashed prefers to just serve up a solid set of anthems, keeping the mid-tempo or slightly faster rhythms rolling, and encourage loads of energy exchange when delivering this material in a live setting. There’s something to be said for giving your followers what they want- and as such, this is another professional outing that works.