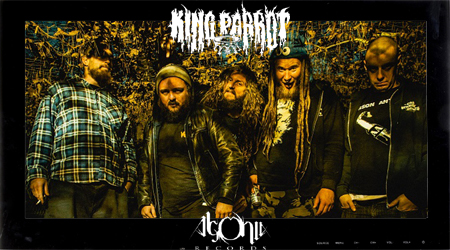 VIDEO PREMIERE: KING PARROT – Home is where the gutter is

"Home is where the gutter is"

From the forthcoming new masterpiece

Australian thrash, grind, hardcore, punk, metallers, KING PARROT are set to unleash their latest studio offering, "Dead Set" on May 15. The follow-up to 2012’s "Bite Your Head Off", "Dead Set" was produced by Phil Anselmo (Pantera, Down) in Nodferatu’s Lair Studio (Down, Eyehategod, Superjoint Ritual). Anselmo also stars in the video for "Like A Rat", the first track released from the new album, and firmly gives them the Anselmo seal of approval, saying:

"King Parrot are a fine body of fellows, and it is our absolute pleasure to be working with these assaulting-yet-charming devils. Their best years are ahead of them!"

Of the new album, vocalist, Matt Young, comments:
"The great thing about this record is that it actually sounds like a real band and is a reflection of where we are at right now. In my eyes, that is everything a record should be. We are super proud of this and can’t wait to show everyone what we have in store".

Emerging from Australian metal scene, KING PARROT have pillaged their way to international recognition since their inception in 2010. Drawing influence from the thrash, grind, hardcore and punk scenes of the 80’s and 90’s, the band have created a fresh sound that perfectly encapsulates their aggression, intensity and dark sense of humour seamlessly. Having been nominated for a Metal Hammer (UK) Golden God Award, 2015 is already shaping up to be an exciting year for KING PARROT.

Following a successful European tour alongside Weedeater in March, the band are planning on returning to the continent later this year!