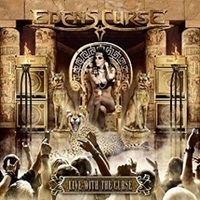 EDEN’S CURSE – Live With the Curse

A live double album used to document a place in time where a band felt comfortable with their previous 3-4 studio records, and signaled the end of one chapter in their career and the beginning of another. Eden’s Curse feel the need to capture their current lineup on stage, as "Live with the Curse" is an 18 song effort (plus short guitar solo and band introductions) that gives the listener a 101 minute performance. Originally hailing from the UK, the band has gone through some significant lineup changes in the past couple of years – including new keyboardist Steve Williams (ex-Power Quest), drummer John Clelland (ex-Code of Silence), and vocalist Nikola Mijic from Serbia.

Those not in the know as far as this band’s sound, it’s very much European melodic hard rock with bluesy overtones – everything from Jaded Heart and Pink Cream 69 to the more commercial side of Firewind or TNT comes to mind when you hear spirited up tempo cuts like "Masquerade Ball", or the epic nature of "Jerusalem Sleeps". Nikola takes this Scottish crowd and brings the energy up ten notches, exhorting chants and hand claps often during intros and transitions to songs like "Break the Silence" or "Evil & Divine". Unafraid to delve back into their 2007’s self-titled debut for "Fly Away" and "Judgement Day", of course the bulk of the set list focuses on their most recent offering from 2013 "Symphony of Sin"- 8 of its 13 tracks making the live record.

Guitarist Thorsten Köhne has all the requisite lead break runs, fluidity, and speed necessary to excite the axe masters and audience who look for fiery play amidst stronger rhythms and hooks. Keeping his guitar solo under 90 seconds was welcome, as I think Eden’s Curse are at their best in the complete band format. Those unfamiliar with the band would find this a treasure trove to dive into, and I hope this proves Eden’s Curse will be a melodic hard rock force to entertain us hopefully for years to come.