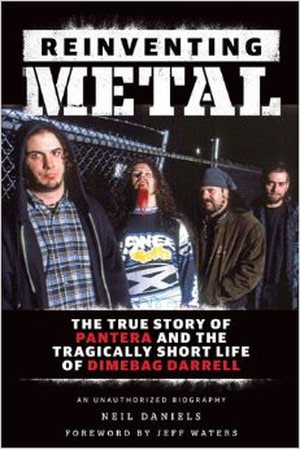 I was very much looking forward to reading this unauthorized biography on Pantera by author Neil Daniels as I thoroughly enjoyed his excellent and highly recommended book on the early days of Iron Maiden, the one entitled «Killers – The Origins of Iron Maiden: 1975-1983». I should probably start off by saying that Pantera were some of my childhood heroes, musically and lyrically speaking, and that I was heavily into their music when I was a teenager. As such, they have always held a special place in my blackened metal heart although the only albums of theirs that I ever really listen to nowadays are «Cowboys from Hell» and «The Great Southern Trendkill». Needless to say, I was quite excited about reading «Reinventing Metal» in that it covers the entire career of Pantera as opposed to only focusing on the major label albums and the extremely successful 90s/early 20s. Having previously read some of Daniel’s written works and being familiar with his thorough research and his ability to uncover obscure details, I felt quite certain that «Reinventing Metal» would be a captivating read, and I was not wrong.

One of the things about «Reinventing Metal» that immediately grabbed my attention was the fact that Daniels clearly holds the music of Pantera in very high regard and is of the opinion that the band consisted of four brilliant musicians who created something that was larger than the sum of its parts. There is a lot of focus on just how mindblowingly awesome and important some of the Pantera songs and albums were, and how much of an impact they had on the heavy metal community. That love and appreciation for the actual music of Pantera and how talented each of the musicians are/were is retained and present in the book from start to finish.

What I enjoyed the most were the first half of the book in which Daniels covers the childhood and upbringing of the Abbott brothers and the first decade of Pantera’s career. Daniels has uncovered a lot of interesting facts, stories, and anecdotes, and his interviews with former members and roadies of the band, namely those that were part of the Pantera machinery in the 80s, were highly enjoyable and fun to read. The foreword by Jeff Waters (Annihilator) is pretty interesting and the comments and quotes throughout the book by different musicians that have at one point or other toured with Pantera or hung out with them lend some perspective to quite a few things, too. Needless to say, it would have been neat if any of the actual members of the classic Pantera line.up had been interviewed or in some way offered their perspective on things, but quite a few quotes taken from different interviews conducted over the years with the four members by other magazines have been nicely incorporated into «Reinventing Metal». In a sense, they lend some weight to some of the arguments and points made by Daniels, so they are there for a reason and serve a purpose. Some of the internal band problems that would crop up from time to time is also touched on and discussed in detail, but, luckily, Daniels neither appears to make any crazy or wild assumptions about any of the darker aspects of Pantera’s career nor make any derogatory comments about any of the band members or some shit like that. As I stated earlier on, the quality of the music and its impact, the musicianship, the hard work in the studio and on the road, and the creative spark of Pantera is in many ways the focus of this book as opposed to scandals and rumors.

While I was not as thrilled, entertained, and moved by «Reinventing Metal» as I was by «Killers – The Origins of Iron Maiden: 1975-1983», I certainly enjoyed reading it and found it well-researched and well-written. There were countless things about the band, especially in relation to the 80s, that I knew absolutely nothing about beforehand, so the first half of the book was a bit of a revelation to me and overall I found it both moving and informative.

LOCH VOSTOK – From These Waters