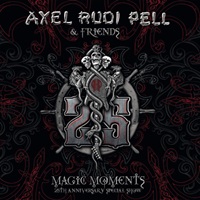 So last year at the Bang Your Head festival in Germany, guitarist Axel Rudi Pell celebrated his 25th year as a solo artist with a special 3 hour show. "Magic Moments- 25th Anniversary Special Show" is a 3 CD/ video set containing a number of surprises and special guest appearances, which is typical in Europe when wanting to give the fans a one of a kind event.

Disc one begins with a 4 song reunion of Axel’s former band Steeler- of which "Call Her Princess" and "Undercover Animal" stuck out to me in a decent way. Peter Burtz as a singer isn’t spectacular, and a lot of the music is typical melodic hard rock that US bands performed slightly better back in those days. Then the solo material kicks in, Rob Rock singing on "Nasty Reputation", while Jeff Scott Soto gets decent airtime for his mid-1990’s work with the band ("Fool Fool" clearly the crowd favorite). Then the current incarnation with Johnny Gioeli kicks in on discs 2 and 3, mixing a lot of favorites and medleys from "Strong as a Rock" to "Into the Storm", even their Neil Young cover of "Hey Hey My My".

Towards the end of the final disc, Axel pulls out a lot of covers from "Mistreated" and "Black Night" by Deep Purple to "Sympathy" by Uriah Heep and "Since You Been Gone" from Russ Ballard – with guest support from Tony Carey, Doogie White, Graham Bonnet, and Michael Voss among others. We also get a prolonged "Drum Battle" between Bobby Rondinelli and Vinny Appice that would have been best served on the cutting room floor (great drummers for sure, but bathroom/ beer break material for most). It’s a 3 hour tour de force if you are a fan of Axel Rudi Pell, who showcases all facets of his career and where his love for all things Richie Blackmore comes into play.

Ardent collectors will desire this- casual fans will be bored and prefer taking ARP in on a studio record at a smaller, more manageable dosage. You always know what you are going to get from this reliable, bluesy hard rock icon – so celebrate with Axel Rudi Pell if you feel the need.

MORBID EVILS – In Hate with the Burning World