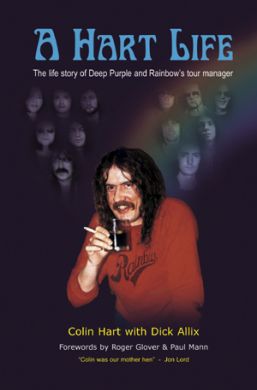 To tell you the truth, I was very excited when a review copy of this excellent piece of literature arrived in my mailbox a couple of weeks ago. "A Hart Life" is neither an ordinary book nor an ordinary run-of-the mill hard rock autobiography. Pretty far from it, actually. Colin Hart worked for the mighty Deep Purple and the mindblowingly brilliant Rainbow for thirty years, which is to say that he worked for Deep Purple from 1971 to 1975 and then worked for Ritchie Blackmore and Rainbow from the latter’s inception (1975) until its demise (1984). Once the Deep Purple (Mk. II line-up) re-united in 1984, Mr. Hart found himself working for those guys once more and stayed loyal to that band until 2001. Needless to say, there are so many interesting stories and anecdotes contained within this book that I simply have no idea where to start. Hart basically starts from the very beginning, which is to say his childhood and upbringing in South Shields and how he became involved in the rock ‘n‘ roll business and why he found the whole thing so captivating. Initially, he served as a roadie for different bands, but eventually found himself employed as tour manager for Deep Purple and Rainbow. Not bad, eh? Hart does not hold anything back and he tells it like it is, which entails that certain chapters and parts will move one to tears while others will infuriate and piss one off to no end. Just think for a minute of all the egos that have been involved in such major bands throughout the years as well as all the ups and downs these musicians experienced. Mr. Hart was there the whole time and witnessed it all. Backstage, on tour, in the recording studio, at bars and nightclubs, at restaurants…you name it, Hart was there. I stumbled on so many things throughout the book that moved me in one way or another, and I found it impossible not to be provoked in a certain sense by a few of the characters involved in the whole tale. The coldness, the cynicism, the heartbreak, the frustration, the glory, and the triumphs. It is all there, and there is obviously a very fine line between genius and insanity. On the other hand, reading all these glorious tales of two of the greatest musicians to ever walk the earth, namely Ronnie James Dio and Cozy Powell, was both beautiful and heart-warming. There can be no doubt that Hart loved those two gentlemen and respected them immensely. The honesty with which Hart addresses certain subjects is refreshing and to-the-point. No beating around the bush or some shit like that.

Reading "A Hart Life" was a blessing, but reviewing it is a curse simply because there are so many things that I would love to tell you, the readers, out there, but I cannot give anything away and I strongly urge you to read this biography for yourself instead, especially if you are into Purple, Rainbow, Whitesnake, and so on. I was not bored for one second and I had trouble putting the book down. It is that exciting and fascinating, and I dare say that whether one is a die-hard fan of Deep Purple and Rainbow or simply a big fan of 70s and 80s hard rock in general this will move, captivate, and fascinate you. Mr. Hart, if you ever read this, let it be known that I salute you for writing this book! "A Hart Life" is strongly recommended. In fact, I think I might just read it again now.