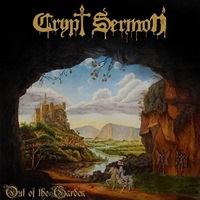 Doom metal as a whole has been one of those cult appeal genres – patience being a requirement as tempos often fall below a resting heart beat and longer arrangements tend to be the norm. Black Sabbath pioneered the sound, spawning younger musicians for decades to try and deliver those evil, plodding chord progressions and sinister vocals that seem to be a marriage made out of angst and despair. Trouble and Solitude Aeturnus are two American acts who helped elevate the appeal of the genre stateside – and it’s my belief that this Philadelphia, PA group Crypt Sermon could be another gem based on my incessant playbacks for their debut album "Out of the Garden".

Candlemass and Solitude Aeturnus factor a lot into the type of classical tinges, logical riff connections, and soaring, magical range from vocalist Brooks Wilson (think Robert Lowe meets Robert Plant). Piped in bells add extra morose texture to early highlight "Heavy Riders", the up-tempo time change mid-way through sure to get an abundance of doom dance movement. Guitarists James Lipczynski and Steve Jansson connect to these songs in an instinctual, almost visceral manner – ringing out parts in unison or often supportive context as "Byzantium" and the follow up "Will of the Ancient Call" illustrate best. Reigning in song structures for the 7 tracks at a typical 5-6 minute clip is another asset to Crypt Sermon’s appeal – nothing drags or drones on, everything logically in place and melody abounds on both the vocal and musical platforms.

The Biblical word themes are not overly preachy, and the band set up many songs brilliantly in terms of injecting exotic chord choices or momentum builders – check out the acoustic to electric transition for the hard charging "Into the Holy of Holies", something that brings me back to early Solitude Aeturnus domination circa "Beyond the Crimson Horizon". Topping this off is a throwback 70’s/early 80’s type production and cover art that could easily be canvas work that non-metal fans would treasure and you’ll see why Crypt Sermon will hit many a best-of list not just for the doom genre, but for heavy metal in general.

Since we will never get another Candlemass studio album (and who knows when Solitude Aeturnus will follow up 2006’s "Alone"), "Out of the Garden" should fill that doom slot brilliantly.