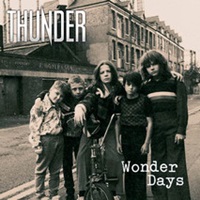 Absence makes a reunion that much sweeter – especially in the case of UK hard rock act Thunder. Those who’ve followed their career know the splash they made during the early 1990’s with their debut album "Backstreet Symphony" and the follow up "Laughing on Judgement Day", as songs such as "Dirty Love" and "Love Walked In" are set staples that endure decades later. "Wonder Days" is their latest studio full length, adding another 11 songs of bluesy hard rock to their fine catalog.

Those who love the 70’s movement that produced Free, Led Zeppelin, and UFO should know what the quintet deliver. Even when deciding to incorporate the mandolin for a serene ballad like "The Rain", it’s done in a musically respectful manner that keeps the essence of classic rock at hand. Danny Bowes doesn’t feel the need to always reach for the sky in terms of his range – but his bluesy, expressive stance contains a lot of David Coverdale meets Paul Rodgers charm on highlights such as "Black Water" and the 6 minute dynamic anthem "When the Music Played". Thunder aligns with the tenets that make melodic, blues-based hard rock a favorite from generations old and young – a memorable combination of solid tempos, smart hooks, and alluring songwriting that is diverse enough to keep your interest from opening note to its final conclusion.

In a just world, "Wonder Days" would be three single deep by now, gaining massive across the board rock radio airplay as the band headlined from country to country to arena size or large festival audiences. Do not let this treasure go unwarranted again – Thunder deliver another top-notch professional record. The veterans like UFO and The Scorpions prove that they can still deliver the original goods in their twilight years – but make sure to include Thunder in the mix for one of the best hard rock records of 2015.