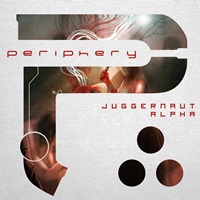 Two new studio albums from this Washington, DC. band who have changed the modern progressive metal game around because of their sonic outlook, Djent nuances, and broader strokes with which to paint their sound. "Juggernaut: Alpha" and "Juggernaut: Omega" serve up 17 songs and 80 minutes plus of music, and assuredly will not change your viewpoint on this act if you are familiar with them to this point. Periphery serve up a number of twisted guitar parts against time signature challenges while the vocals also circle like vultures in a melodic manner one moment, and blood curdling screams the next.

Occasionally offering up a light jazz jam towards the end of the otherwise blistering "MK Ultra" or setting things up in a cinematic, almost Faith No More meets Fair to Midland manner on the 5:35 "The Scourge", "Juggernaut: Alpha" appears to be the more experimental Periphery album of the two at hand this time out. "Alpha" itself has that old 8-bit video game bounce to the proceedings, the opening keyboard blips transformed into a heavier song while singer Spencer Sotelo flexes his muscles in a very commercial manner during the chorus. The slower chug of "22 Faces" and odd clean to aggressive change up for the 6 minute "Psychosphere" have legs to become staples in future set lists.

"Juggernaut: Omega" contains an interesting acoustic oriented number with "Priestess" while the follow up "Graveless" features normal scattershot musicianship amidst the guitars, bass, and drums – taking modern progressive metal to their faithful following in their established comfort zone. Overall though as the second album moves into the 11:44 "Omega" or 7:35 Djent heavy "Stranger Things", I find my interest level waning because the art of strong hooks and melodies isn’t as important as being intricate and technically impressive.

This again boils down to what you love and appreciate about the genre at hand. I can respect Periphery for their desire to take modern metal and progressive sounds into their own direction – but overall I just don’t get the long-lasting feeling that they will create an anthem or two for the ages.